Dr. Naugher is a board-certified orthopaedic surgeon with TSAOG Orthopaedics (formerly The San Antonio Orthopaedic Group). He is a fellowship trained in sports medicine physician and treats patients aged 3 years and up for any sports-related injury or orthopaedic condition of the shoulder, elbow, hip and knee.

Doctor Naugher has a special interest in sports injuries, total joint replacements of the shoulder, hip, and knee, and arthroscopic surgery of the shoulder, elbow, hip and knee. He has appointments available at our Quarry Area, Schertz, New Braunfels, and Brooks City Base locations.

He is a native Texan who grew up in San Antonio and then in north Texas until his graduation from Denton High School where he played football, baseball, soccer and basketball. He attended Baylor University, earning his degree in Economics. His medical education was completed at the University of Texas at Houston where his was named to the Alpha Omega Alpha Honor Medical Society.

Dr. Naugher completed his residency training in Orthopaedic Surgery at the University of Texas Southwestern Medical Center and at Parkland Hospital in Dallas, Texas. During residency, he also spent time in Norwich, England – gaining extensive experience in complex reconstructive surgery of the knee and total joint arthroplasty. He was selected as Chief Resident during his final year of residency. He then left Texas briefly, completing his Sports Medicine fellowship at Wake Forest Medical Center in Winston Salem, North Carolina.

At Wake Forest, he furthered his expertise in arthroscopic surgical techniques for the shoulder, elbow, hip, and knee as well as robotic assisted partial knee replacements. He also served as a team physician for Wake Forest University Athletics and for the Winston Salem Dash, the MLB Chicago White Sox minor league affiliate.

After completing his fellowship training, he returned to Texas with his wife and two children to join The San Antonio Orthopaedic Group. He is an avid sports fan that that enjoys being active, Crossfit, golf, and time with his wife and kids. 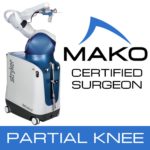